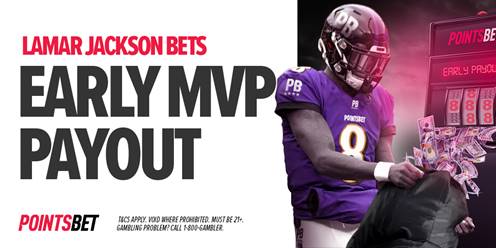 Lamar is already the MVP at Pointsbet.

Good luck finding another sports book that would do this for it’s players. That’s right, Pointsbet has struck again with another good karma decision for it’s players. So what happened this time? Another refund on a bad beat? A bad call that decided a game? No, it’s Lamar Jackson that happened!

The crew at PB is so impressed by Jackson’s play so-far this season, that they have decided to pay out all futures bets on the Ravens QB to be MVP. Prior to the season, odds on the speedster signal caller to win the award trended around +7000. Currently, the line has fallen all the way to +130 on Lamar to be MVP.

We checked in with Pointsbet CEO Johnny Aitken, who had this to say about the decision

“We’ve really enjoyed watching Lamar Jackson make the impossible look easy every Sunday” said Aitken. “Considering some of his recent performances and looking ahead at the Ravens’ remaining schedule, it’s pretty clear to us that Lamar is simply a freight train that won’t be stopped.” The PB CEO went on to explain that “we think it’s only fair to reward all of our clients who had the foresight to place their bets on the right long shot.”

The book’s decision to throw in the towel on Lamar Jackson MVP bets might be a smart one. With 13 percent of tickets wagered on Lamar, he is the second biggest liability for PB next to Chrisitan McCaffrey.

It appears now that only an injury could stop Jackson from being MVP, so an early payout gives the book a chance to recoup losses. Probably, PB is hoping that fattened mid season bank rolls for Lamar backers, will result in such a return. With 6 weeks plus the NFL playoffs still to be played, they will have ample time to do so.

Stay tuned to The Props Network for all your NFL and NBA betting news and bonuses.