The NFL ON Film- 12 Must Watch Movies for Football Fans 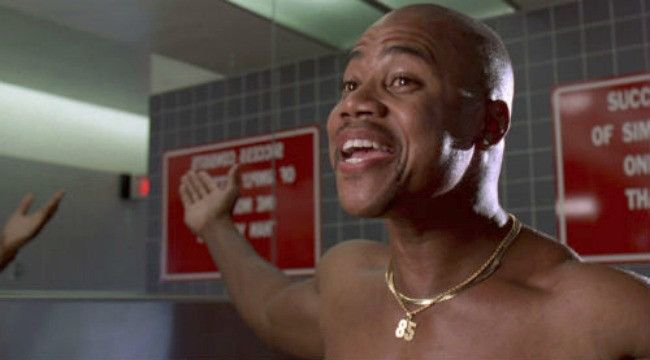 The NFL is a billion-dollar merchandising industry, and “The Shield” is very protective of the brand when it comes to references in movies to it’s teams.

For every Hollywood film featuring the Dallas Cowboys or Miami Dolphins, there are others whose too-naughty-for-NFL screenplays force a thinly-veiled version – like the North Dallas Bulls from 1979’s North Dallas Forty, or the Miami Sharks from 2000’s Any Given Sunday.

Other football films focus more on the high school and college years of future NFL players, like Michael Oher in 2009’s The Blindside, and Ernie Davis & Jim Brown in 2008’s The Express. Then there are unreleased films, like 2015’s Family First: The Marshawn Lynch Story, which now only exists as a notorious four-minute trailer.

With wintertime binge watching season rapidly approaching, I set out to list the top 12 appearances by real NFL teams and their players (both real and imagined) in the movies.

So, which movies made the cut?

The Top 12 Movies for NFL Fans

Note:  Back in 2016, to mark Jerry Maguire‘s 20th anniversary, NFL network made a trailer for A Football Life episode about the career of Rod Tidwell (Cuba Gooding Jr.). Spoiler: He was shown money.

Note: The Ringer has a great pseudo-review of the film, where they break down the draft decisions made by Kevin Costner’s Cleveland Browns GM, Sonny Weaver (including trades with the Seahawks and Jaguars), and the poor acting chops of Roger Goodell.

Note: A deranged Goodyear Blimp pilot works with a terrorist group to turn his aircraft into a suicide bomb, aiming to blow it up within the Miami Orange Bowl during Super Bowl X, between the Dallas Cowboys and Pittsburgh Steelers. Spoiler: The Steelers win.

Note: Alan Alda is George Plimpton in this adaptation of the writer’s book of the same name, wherein he participates in the Detroit Lions training camp for a Sports Illustrated article. It co-stars real player (and Blazing Saddles‘ Mongo) Alex Karras, and incorporates footage from a 1967 NFL preseason game between the Lions and Cardinals.

Note: Warren Beatty is Rams QB Joe Pendleton, whose road to the Super Bowl is interrupted by death. He gets reincarnated (twice), and wins the Lombardi trophy. Top THAT, Jared Goff.

Note: If Dan Marino had held that football with laces out for Dolphins kicker Ray Finkle, Miami’s 1984 team would have won the Super Bowl. I don’t care what the replay shows.

Note: Charlton Heston is boozing, philandering veteran Saints QB Ron “Cat” Catlan. His quest for a second league championship (and his career) is ended with a brutal sack by three Dallas Cowboys, in a filming take that broke three of Heston’s ribs.

Note: Jets QB Flash Gordon’s football career is interrupted by space war against Ming the Merciless. He wins, and the film’s killer Queen soundtrack is enjoyed by all.

Note: Patton Oswalt is parking garage attendant (and Giants super-fan) Paul Aufiero, who gets a beat-down from Big Blue star linebacker Quantrell Bishop at a Manhattan strip club, after seeing him buy drugs in Staten Island. But Aufiero drops assault charges against Bishop, because it would hurt the team’s on-field performance against the hated Eagles.

Note: I was tempted to go with inspirational 1980 TV movie, Fighting Back: The Rocky Bleier Story – but Concussion’s depressing portrayal of Steelers with CTE is far more well known.