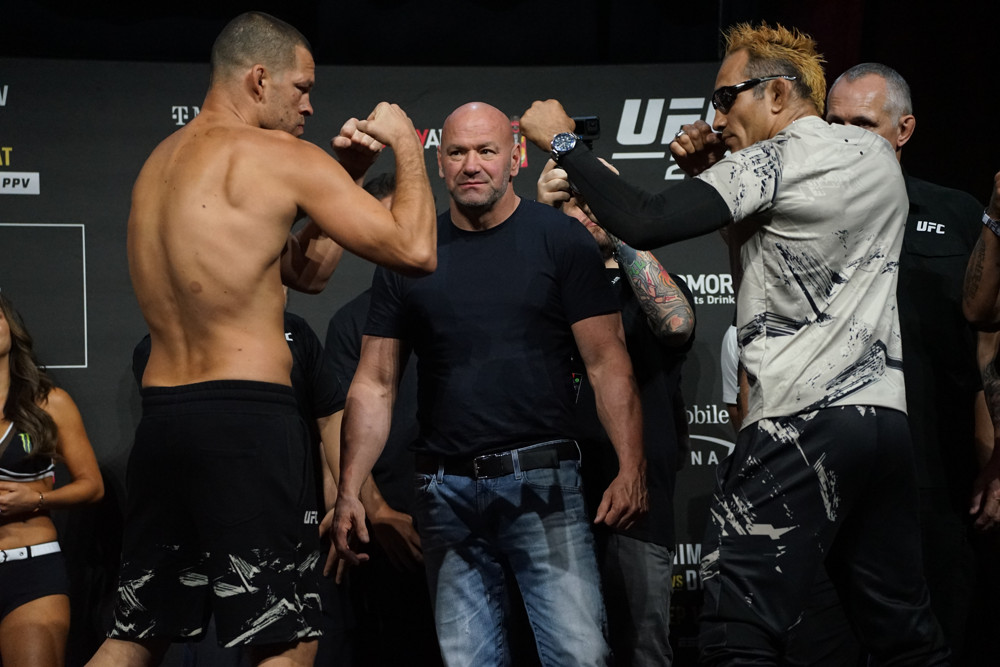 This has been by far one of the craziest fight weeks in the history of this sport. We had a brawl at the press conference that canceled the event and that was just the tip of the iceberg. The following day the main event between Khamzat Chimaev and Nate Diaz was called off after Chimaev missed weight by 7.5 lbs.

After these events occurred we now have a new lineup of fights to end the UFC 279 fight card. In our main event, we now have Nate Diaz taking on Tony Ferguson in a fight that all of the fans have been wanting to see for years! Now with that said, let’s take an in-depth look at our new main event for UFC 279.

Tale of the Tape

Fight fans rejoice because we finally get to see a fight we all have been dying to see for years now. A fight between Nate Diaz and Tony Ferguson has the makings of being one of the all-time great fights in the history of the UFC. They both have a fan-friendly style that is hard for this fight not to deliver on all levels.

Diaz and Ferguson had nightmare matchups just 24 hours ago and now this fight is essentially 50/50 and it could go either way. That is why this fight is as close as it is on the betting line and rightfully so. What we do know is both fighters have been notoriously durable, have great cardio, and can push a pace for 25 minutes with no problem.

Diaz has said on numerous occasions that the fight with Khamzat Chimaev wasn’t what he wanted and he didn’t train as hard as he could for it. Now, he gets to fight a fun fight against a very similar fighter as himself Tony Ferguson. This is a fight where Diaz can definitely shine because he will be able to go out there and work his Diaz magic and that is getting into an all-out war.

For Ferguson, he was moving up in weight to take on the dangerous Li Jingliang and now he gets a very favorable matchup against Diaz. Now where the problem lies for Ferguson is that he was training for a 3-round fight and now he will be fighting a 5-round fight on such short notice. We know Diaz can push a pace for 25 minutes but can Ferguson given the intangibles at hand?

In this fight, you can expect both of these fighters to just stand and trade in the center of the octagon. Neither fighter has a ton of power so the likelihood of a one-punch knockout doesn’t seem high. So then, it comes down to who wants it more and who can deliver and take the most damage. Given that Ferguson has taken much more damage than Diaz in recent years, Diaz may have the upper hand in that department.

With that said, Ferguson also has been fighting elite competition while Diaz has been inactive for the most part. Each fighter has the ability to get the job done but I fully expect this fight to be razor close for the entirety of this fight. Grab your popcorn and get ready for this exciting main event because it is going to down as one of the best ever, don’t miss out!