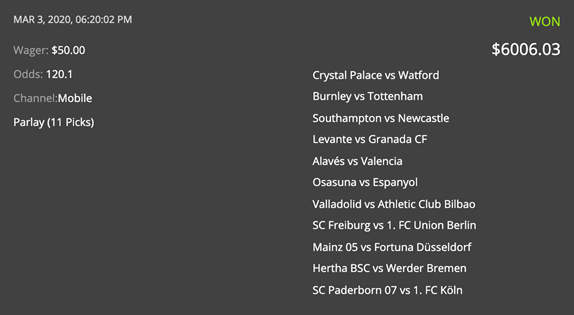 Another week of sports betting action is almost in the books. Let’s look back at a few betting highlights from the week that was in this edition of Big Bets.

An anonymous user at DraftKings Sportsbook had their eye on on 11 soccer bets, so they all went into one $50 11-leg parlay. The eleven bets were all double chance soccer bets happening throughout last weekend. If they all hit, the payout would be +11910.

A double chance bet covers all the possible outcomes in soccer game. So, you can take ‘Away Team and Draw’ for example. That means your bet would win if the away team wins the game or the match result is a tie.

One Heck of a Home Ice NHL Parlay

Amazingly, every home team in the NHL won last Saturday in the NHL. That may not seem like a huge deal, but 5 out of 6 of these teams were home underdogs. There was one DraftKings Player who saw this as an opportunity, and put all of the NHL home teams into one 6-pick parlay. The $53 bet would pay out BIG if they all won.

Well, they did ALL win. This player was craving some home cooking and now they can hire a personal chef. The $53 bet paid out $8788.90.

An anonymous betting writer, who may or may not be writing this article, was the victim of the Big Bets bad beat of the week. It happened last Friday during the second round of the Arnold Palmer Inv. at Bay Hill. This mysterious bettor played a 4-pick round robin parlay. All legs were head-to-head matchups for the API Tournament. If all four of these matchups hit, the player would win over $1500 on $100 wagered.

In case you don’t know, a round robin is a way to make individual bets on each possible combination of the legs in your parlay. With four legs, you end up with one 4-leg bet plus multiple 2 and 3 leg parlays. The matchups were;

As the first and second round played out, and the 36 hole cut approached, it looked as if several of these matchups would be over before the weekend. Some of the money would be paid out early and the others looked to be in good shape with substantial leads in place for the selected players.

It would even work out if Jason Day missed the cut, as he had a multiple shot lead over Tony Finau. Finau was never a threat to make the cut and play the weekend. What happened next was terrible, yet unsurprising.

For the second year in a row, Jason Day withdrew from the tournament due to a bad back.

The player watched in horror as Day hunched over in pain and called for a cart to take him off the course.

The round robin parlay that looked to be on cruise control, crashed and burned when Day left the course. Had he made it through just 13 more holes, the bet would have paid out in full.

What lesson did we learn here? For one, golf could use some injury reporting. Secondly, no matter what, let’s all agree not to bet on Jason Day at Bay Hill anymore.

Stay tuned to The Props Network for more betting news and picks.