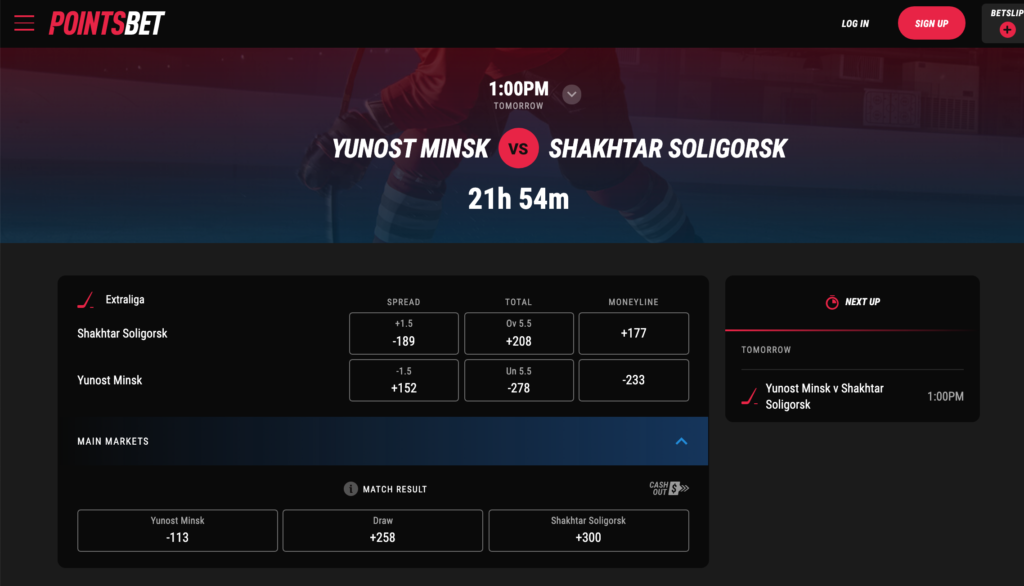 Belarus Extraleauge Hockey Finals to be Featured on PointsBet Sportsbook

Playoff hockey is coming to PointsBet Sportsbook this week from the Belarus Extraleague. We have no sports in America right now. Fortunately, Belarus will allow the BHL Finals to go on.

PointsBet has not yet announced details of how the broadcast will be seen. However, sources tell us that the game will be available for PB users to bet on and watch in New Jersey.

Get 4 Risk Free Bets up to $1000 at PointsBet NJ and Indiana Online Sportsbook.

The odds and lines can be found by going to the drop down menu on the left, then scrolling down to ‘hockey’. You will see that Yunost Minsk is a home favorite vs Shakhtar Soligorsk. The -1.5 puck line on Minsk pays +145 ($100 to win $145) and the money line is -233 on the home team.

The BHL Finals Start on Friday

The series is a best of 7, just like the NHL. Game 1 is on Friday at 1 PM ET in Minsk. The first two games will be played in the nations capital before moving to Shakhtar for the next two games. The series will then alternate if needed.

Players who want to invest in this series can also bet on which team will win the BHL championship. Minsk is a prohibitive favorite at -304 to win. But if you like an underdog you could get +225 for an upset by Shakhtar.

Then there are the series props. A sweep by Minsk is an appealing bet at +600. That could be backed up with a 4-1 series correct score bet at +300. Knowing nothing about this league, we would go that route if betting the series.

Or, players can bet on the total number of games rather than the winner. The most likely outcome according to PointsBet is a 6 game series at +200. A sweep by either team is the longest shot at +430.

About the BHL and the teams

The Belarusian Extraleague or BHL is the number one hockey league in Belarus. Yunost Minsk is the defending league champion and leads in BHL history with 8 titles. The team is based in Minsk, the capital and largest city in Belarus.

Shakthtar Soligorsk is based in Soligorsk Belarus. The club has won previous league title in 2015.

There are Draws in Belarus Extraleague Hockey.

Clicking the drop down menu reveals the Match Result option for betting on this game. Like a soccer or golf match, the payouts are bigger if you bet this way. Why? Because you are risking the possibility of a draw happening that will not result in a push on your bet. Yunost Minsk is -113 if you bet this way and Shakhtar Soligorsk is +301.

The best translation of the BHL rules that we have found indicates that a draw means that there will be a 20 min sudden death overtime. The Team, throw the pick is the winner. Play-offs are conducted without shoot-throws.

Sounds like overtime is followed by a shootout, even in the finals.

‘No one cares’ about Coronavirus in Belarus says soccer star.

The Belarusian Premier League has also continued having soccer games during the pandemic. League star Alexander Hleb told Foxsports.com that people in the country are not worried about the virus. He said that “all the world now watches Belarusian league” and “Everybody should go to their television and see us”.

“All Alone, Belarus Plays On” was the headline in the NY Times this week, as the continuing of sports has stirred controversy and excitement.

Hockey in the country has taken a similar stance, continuing to have games as they perhaps see an opportunity to get attention on an empty global stage.