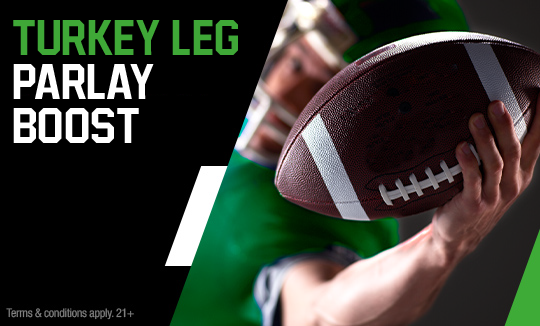 Don’t listen to me.

I was totally wrong about the Rams because I was in denial. Deep down inside I knew it was folly, but I had to try. Don’t worry, I didn’t go large on them even though right before I kickoff I was wondering why I didn’t hammer the Ravens at -3.5 for five dimes like a real man.

Anyways, now that we have that out of the way, I can say the Pats were the right side and didn’t cover only because of two missed field goals. Dallas still sucks and they need a coaching staff that can actually coach. I can also admit that Green Bay has proven themselves to be soft as butter. I have no faith in the Pack except against the worst of teams.

ON TO THE THANKSGIVING NFL GORGING…

All Lines are from Unibet Sportsbook. Play the Turkey Leg Parlay today for a 50% profit boost on Thanksgiving NFL action. Click HERE for details.

Yuck. The Bears are absolute garbage on offense. Mitch Trubisky is only starting because the Bears invested so much draft capital in him and foolishly took him over DeShaun Watson and Pat Mahomes. Think about it, the Bears traded up for a guy who started only one mediocre year in college and for their reward have a guy who is regressing in every way possible. Don’t give me this, “no one ever really knows” bullshit. All you had to do was watch the Clemson and Louisville game when Watson and Jackson lit it up to know that yes, the eye test matters.

In this case, the eye test says Detroit is in trouble no matter how you slice it. They have injuries all over the field and might have to start David Blough if Jeff Driskell’s hamstring keeps him out and as of 4:34 PST, Detroit is expected to start Blough. Before the season started Blough was Cleveland’d fourth string QB. Imagine trying to put together a game plan for this situation.

Did I mention the injuries? Tracey Walker, Damon Harrison, Da’Shawn Hand, and Trey Flowers are all questionable. Corners Rashaan Melvin and Jamal Agnew are out. Look, Mitch is awful, but even he can get something going against these guys. I know, “classic bounce back spot for Detroit!” is lurking somewhere in your brain after listening to three years of gambling podcasts, but no, Detroit will not do well against the Bears defense.

Don’t expect a lot of scoring unless there is a pick six or special teams touchdown and most bettors agree. Vegas has pushed the over down to 37 from an opening line of 41, so most of you guys have been smartly snagging that early play to the point to where there’s not much value.

Generally, this game is so putrid it’s a pass for me, and it should be for you too, but if a gun were to my head I’d take the first half under and hammer the Bears at -5. I expect the Bears to run a lot, roll Mitch out to give him some breathing space, get a couple early scores, and then trust their defense to hold the Lions non-existent offense in check.

The Cowboys have no business being favored by a touchdown against anyone right now. I know you can make the case that Buffalo is way overrated and a phony eight-win team, but come on. Dallas hasn’t beaten a winning team all year and now you’re expecting them to do it at home against a legitimately good defense? Not with this coaching staff leading the way. I know the weather was a big factor last week, but I just can’t see the Cowboys covering a touchdown against anyone left on their schedule save for maybe the Redskins, and that’s fully well knowing that the Rams are completely demoralized.

At this point the Cowboys would be better off letting Dak Prescott call his own plays. The run and pass balance is awful and the defense has to do way too much work. I am not sold on Buffalo’s offense at all. They turned in a lackluster game at home against Philly, but that was when Philly still had hope.

This is the time of the year where we finally have a decent feel for who is who and what team does what. The Bills pound the rock, play defense, and let Josh Allen air it out now and again. Sure, since they gave up 31 to Philly the Bills have held their last four (really shitty) opponents to a total of 48 points, but that’s better than Dallas giving up and average of 28.25 PPG including DETROIT.

BONUS PICK: if you’re nasty, take the OVER 47

Saints revenge game! Saints pissed about losing at home to Atlanta! The Falcons finally ended their run of decent play! It’s still under a roof! These things are all true, but so is New Orleans’ penchant for dumb penalties. Last week they got hit with 17 flags and have 86 in 11 games with 23 for offensive holding alone. Holding and false starts absolutely kill drives, but look, the defense is guilty of this shit too with personal fouls and pass interference calls. Is it irony or reverse cosmic justice that the Saints are getting so many flags after getting hosed by the most obvious non-call on a PI in football history?

Regardless, this is always a tough divisional game and both teams are fully capable of lighting up the scoreboard. In a vacuum you have to run with the Saints, right? I don’t know. Short weeks are brutal and everyone is going to be drunk, full, and possibly chasing.

The Saints motivation is to get that two-seed in the playoffs and lock up at least one home game. The Falcons are playing to keep their coach from being fired and not having the whole group blown up. The wannabe sharp in me says the Falcons keep it close. The realist who has been watching both teams a lot this season thinks it’s a blowout. Basically, if you back the Saints you’re banking on them not giving the Falcons six first downs on 11 penalties and keeping Brees upright.  I don’t think that’s a bad way to look at it.