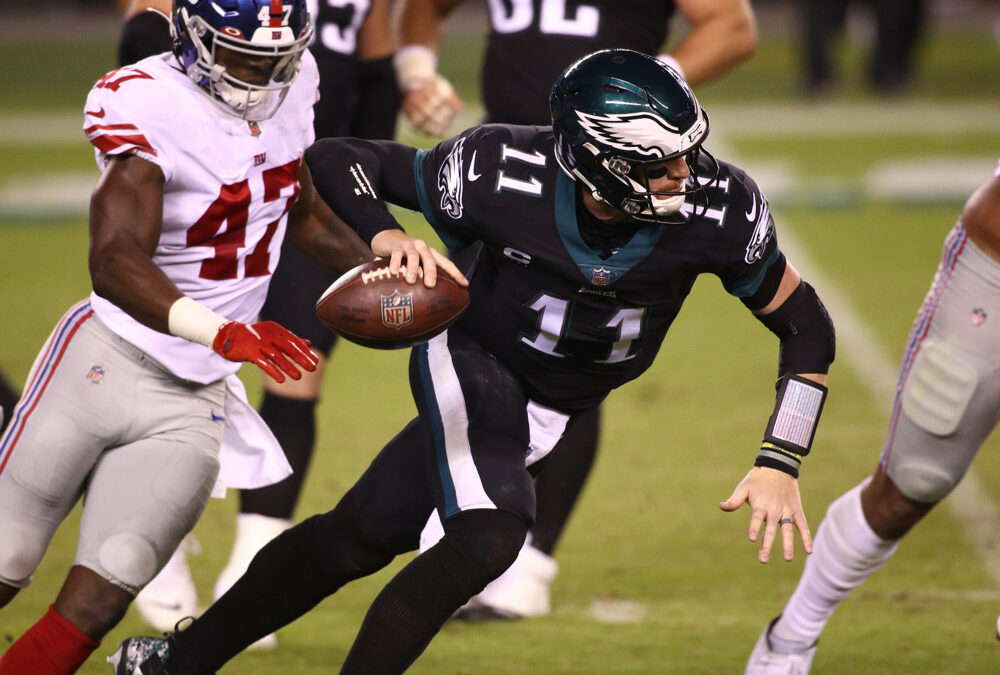 Betting All the NFL Week 10 Games

Last Week: Even though I had some rough losses, I still came out on top in week 9. We’re a little over halfway through the season and I’m sitting at just over 56% on my picks for the year. All in all, I can’t be too upset about the STUPID STEELERS NOT KICKING A FIELD GOAL. But we won’t dwell on that. In case you’re new, here are the ground-rules I set for myself in this weekly quest for a perfect week of NFL betting: I can’t take heavy favorites, all odds must be less than -160, and I must bet on every single game, every single week. So without further ado, let’s get into it.

Battle for the NFC East! Something I’ve been doing recently is teasing the Giants spread and the under in Giants games, and it’s working like a charm. The Giants may not win every game, but by God they’ll keep games way closer than they should be. Their last 5 games have been decided by scores of 3, 1, 1, 2, and 3 points.

The Eagles are getting healthy and I think they have a shot to start putting some pieces together, but I still can’t trust them enough to lay points with them. The Giants and Eagles are both in the bottom 8 in the NFL in scoring, and I’m hoping this is another slugfest from these two teams. The Pick: Giants +9.5 and Under 50.5 Teaser (-110)

You’re telling me I get to pick the Browns at home and they’re only laying 3 points against a Texans team that barely pulled it out against the Jake Luton-led Jaguars last week? I’m terrified at how easy this pick feels.

It’s Chubb season again in Cleveland! Nick Chubb is set to return to the field against the Texans, and he couldn’t be in for a juicier matchup. The Texans give up a league worst 160 yards per game on the ground. With Cleveland averaging 150 rushing yards per game, and getting their premier running back in action, the Browns should run all over the Texans. The Pick: Browns -3 (-115)

I snuck this pick in a couple hours before the Big Ben COVID news broke. Now I feel ecstatic about it. With all the uncertainty that COVID brings to the season, sometimes grabbing a spread that you like early can pay off. Alternatively, if Burrow was deemed ineligible, I’d be kicking myself. But the Pandemic Gods have smiled upon me this week.

The Bengals are a scrappy team. They’re coming off a bye that should allow them to get healthy, and in the three games before their bye they looked like a team that could stay close with anyone, and they even handed the Titans their second loss a couple weeks ago. Even if Ben ends up playing, he’s going to miss most of the week of practice, and this spread feels too big for a divisional rivalry. The Pick: Bengals +9 (-115) [Draftkings Sportsbook]

Today, I’ll go with my heart. I’m a sucker for sticking to my gut even when I know it’s going to be wrong. Since McVay took over, the Rams are 4-2 against the Seahawks, and that was before the Seahawks had a historically terrible offense. Seattle is giving up over 30 points per game while the Rams are giving up 19. The Rams still haven’t beaten a good team this year, so I’m horrified that I’ll get this pick wrong, but I’m hoping McVay can torch the Seahawk secondary and win this thing at home.The Pick: Rams -1 (-110)

The Ravens offense and Lamar Jackson have been the focal point of this team for the past couple of years, but we need to talk about this Baltimore defense. They’re allowing the least points per game in the NFL and they’re averaging almost 2 takeaways per game. When the offense has struggled, the defense has carried this team.

This is bad news for a Patriots defense that is averaging less than 21 points per game and has looked sluggish quite often during the season. Both of these teams have good running games, but you have to give the edge to the Ravens on offense and defense. The Pats do play better at home, Baltimore to Foxborough isn’t exactly a daunting road trip. The Ravens should cover, especially if they want to cling to any hope of winning their division. The Pick: Ravens -6 (-132) [Draftkings Sportsbook]

I said it last week and I’ll say it again this week, the Colts are a little fraudulent. They haven’t beaten a good team yet this year, and their offense was exploited against a good Ravens defense. Also, and this is no help to anyone but myself, but I have a futures bet for the Colts to make the playoffs, so this is a nice little hedge for me. The Pick: Titans -1 (-103)

The Panthers aren’t going to be able to pull off fake punts every single week. Are they? This is a big bounceback spot for the Bucs after they got decimated by the Saints in primetime. I don’t think I can bet on Tom Brady losing two games in a row. The Pick: Buccaneers -3 (-121) [Borgata]

Alex Smith is not an inspiring quarterback to lead this Washington Football team to victory. I bought a point to get this to the key number, but I’m hoping the Lions bounce back this week after getting shredded on Sunday. The Pick: Lions -3 (-121) [Unibet]

I do think the Packers can cover 13 points, which is where the spread is currently set, but that leaves the backdoor wide open for garbage time madness. In every one of the Packers wins this year, they’ve scored 30 or more points. This Jaguars defense is the worst in the league, and I’m expecting the Packers have their way on offense. The Pick: Packers Over 30 Team Total Points (-125) [PointsBet Sportsbook]

I bought a point and a half to get this to the key number, but this game is a total tossup for me. I’m basically taking the team that isn’t laying points because I don’t know which side of this game to fall on. This is going to be the biggest height discrepancy between quarterbacks we’ve seen in decades (I did not look this up, but it has to be true). The Pick: Bills +3 (-139) [Draftkings Sportsbook]

The Broncos are second half kings. In their last 2 games they’ve scored 24 and 28 points in the second half in games they were trailing. Drew Lock is a garbage time monster, and I’ll take him and the Broncos to finish this game within a touchdown, even if they’re behind the entire game. The Pick: Broncos +7 (-139) [BetMGM]

One of these teams has played consistently good defense and has held their leads. The other has given up 30 points a game over their last 6 games and can’t hold a lead to save their life. The Dolphins are hot and the Chargers are cursed. The Pick: Dolphins -2 (-121) [Borgata]

The spread is set at 9, which is a little too high for my liking, so I bought it down to -7 for the Saints. The 49ers are definitely a trap team so I’m nervous about this game, but with all the injuries San Francisco has and with the Saints finally getting healthy on offense, it only makes sense the Saints should dominate. The Pick: Saints -7 (-129) [BetMGM]

Cousins is 0-9 on MNF. He had an 0-6 record with Washington in Monday night games, and that losing trend has continued with Minnesota. I’m historically terrible at picking Monday Night games, but even I have more wins than Kirk Cousins does in prime time. I think the Bears are honestly one of the worst teams in the NFL, and I think the Vikings are finally getting their act together, so instead of doing what my brain is telling me to do, which is take the Vikings, I’m doing the opposite because Kirk Cousins is cursed on Monday night and so am I. The Pick: Bears +3 (-110) [UniBet]

There you have it folks! A perfect week! 14-0! A no doubter! If you disagree with any of my picks, let me know on twitter @steveclark217. You’ll obviously be wrong because this is the week I get every game right, but I’d love to hear from you. Enjoy the football!