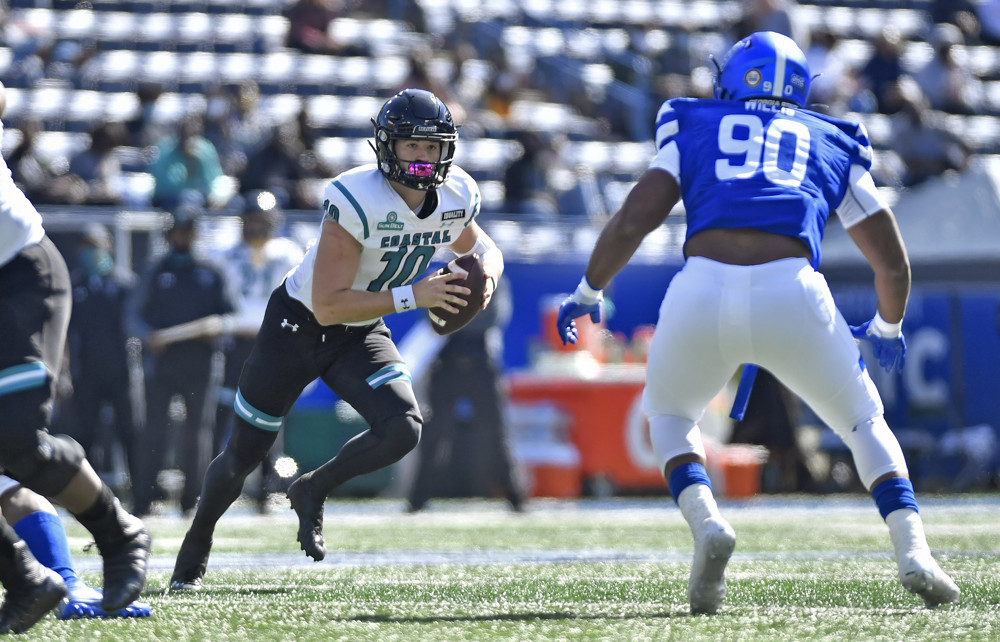 This is not the most exciting week for college football. There is not a single matchup of ranked teams this weekend but that doesn’t mean we can’t build some bankroll. Last week I went 4-3 ATS with my picks last week to be plus money two weeks in a row here on The Props Network. We got off to a rough start in the Wyoming game on Thursday night when the Cowboys lost to CSU in Ft. Collins but after that we were able to rack up wins.  BYU -2.5, Notre Dame +5.5, Iowa -6.5 , and Cincinnati -13.5 were all profitable and I am feeling great about my picks in both power five and non-power five conferences.

Let’s get this week started with my top three picks against the spread for games outside the Power Five conferences for week 11 of the College Football Season.

Last week I picked against both Boise State and Colorado State. I won picking against Boise State and lost picking against Colorado State who won outright over Wyoming. This has certainly helped inform my pick for this week’s Thursday night game in the Mountain West. Colorado State had an exciting upset win over their rivals Wyoming last Saturday night in the border war and Boise State were destroyed last Friday night on their home field when #8 BYU paid them a visit. Colorado State has an uphill battle this week. They have to travel to Boise on a short week to take on the Broncos who will have had an extra day of rest and will be eager to reestablish themselves as the best in the Mountain West after last week’s 51-17 loss to BYU. This must be why the Broncos are 13.5 point favorites. In my opinion that is way too many points.

Boise State’s top two quarterbacks are both likely to be out this week and they are going to have to start their third string QB against CSU. The Broncos were a completely different team with their two QBs Sophomore Hank Bachmeier and Junior Jack Sears were under center. In the games before he got hurt, Boise State won and covered easily in each game. They beat Utah State by 29 and Air Force by 19. Bachmeier was out for the BYU game and Sears went out of that game with an injury in the first quarter. The injuries at QB do not explain why the Boise State defense gave up 51 points. The Pick: The horrible defensive performance and the uncertainty at the quarterback position leads me to believe that the 13.5 point spread is far too much for the Broncos to be giving to a revitalized Colorado State team. For that reason, I am going to get my weekend started by taking the Colorado State Rams +13.5 on Thursday night.

The #16 ranked Coastal Carolina Chanticleers will take the field as one of the last remaining undefeated teams in the country on Saturday. Their perfect record will be on the line when they travel down to Alabama to take on the Troy Trojans. Right now the Chanticleers are favored by ten points and I still don’t believe that’s enough. Only one of Coastal Carolina’s seven wins has been decided by single digits and that was a three point win on the road over #21 ranked Louisiana who look like the second best team in the conference behind Coastal. Troy on the other hand seem to be solidly in the middle of the Sun Belt. They are currently a mediocre 2-2 in conference play. That includes a loss to Georgia State, a team that Coastal beat 51-0. My only worry is that Coastal might be looking ahead to next week’s big matchup against Appalachian State. If Coastal wants to finish undefeated their biggest tests will be App State and Liberty later this season. With that in mind, they could be overlooking Troy this week. Personally, I would not blame Coastal for looking past Troy. The Trojans have a soft run defense that gives up over 160 yards on the ground per game. The running game of Coastal Carolina is averaging over 200 yards on the ground per game and they should be able to exploit Troy’s defense. The Pick: Even if Coastal is looking ahead, I think they can keep the ball away from Troy for a majority of the game and win this game by double digits with ease. I feel more than confident that Coastal Carolina stays undefeated and beats Troy by double digits on Saturday. That is why my money will be on the Chanticleers -10.

Saturday afternoon in Conference USA. I will admit we are reaching pretty far to try and find a pick for this last one but I would not have made this pick if I didn’t think there was value to be found in it. Louisiana Tech is 4-3 so far this season and the Bulldogs are even better than their record shows. Their losses came against two of the very best teams in all of College Football right now, Marshall and BYU. Their only other loss was a 27-26 defeat to University of Texas San Antonio in the Alamo Dome. These are three very excusable losses and last week LA Tech got back on track with a win over a good UAB team. They have a great aerial attack lead by Senior QB Luke Anthony and Senior WR Adrian Hardy who have 1208 passing yards with 13 touchdowns and 440 receiving yards and 4 touchdowns, respectively. Rice on the other hand, have only played two games so far and they have won one and lost one. They lost to a bad MTSU team in their first game out and beat an even worse Southern Mississippi team on Halloween. Rice have a similarly good QB and WR combination with Mike Collins and Austin Trammell, but other than that the Rice Owls are very unremarkable with a league average defense and rushing offense. LA Tech has played far more games against teams that are far better than Rice. The Pick: The Bulldogs are coming into this game battle tested and energized from last week’s win over UAB and that is why I like LA Tech +1 at home over the Rice Owls on Saturday. Get live online sportsbook odds shopping for every college football game at The Props Network. Remember it’s 21+ to bet online. Do you or someone you know have a gambling problem? Call 1.800.Gambler today.