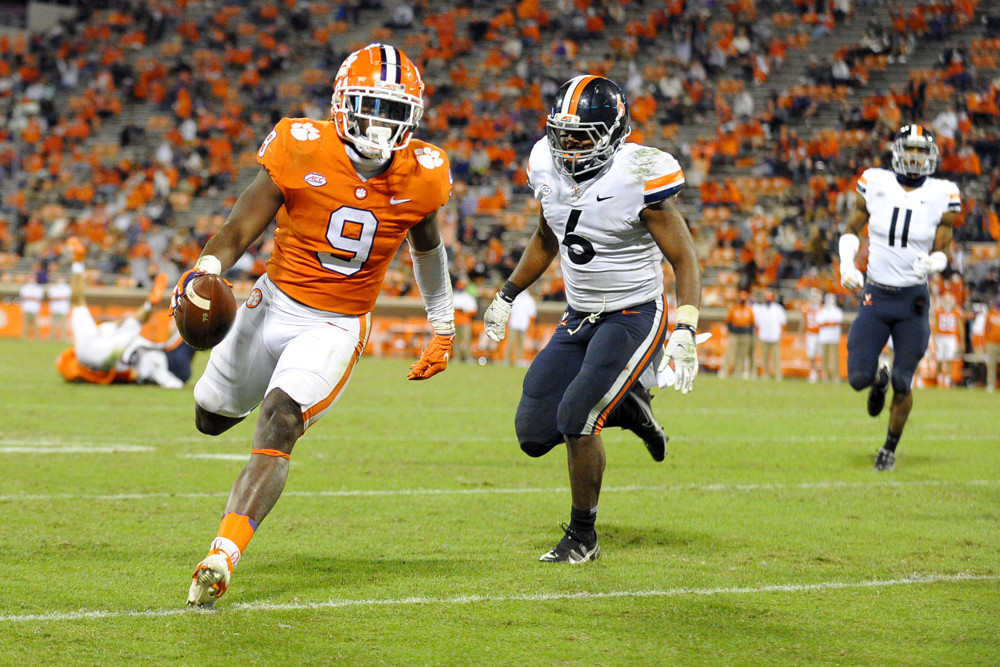 Clemson vs Notre Dame is the CFB game of the week

This game was one of the most anticipated games of the season as soon as it was announced that Notre Dame was going to be playing in the ACC. This could have been a certain college football playoff play-in game. This could have been Trevor Lawrence’s opportunity to separate himself from the rest of the pack in the race for the Heisman Trophy. But all that changed with the headline “Trevor Lawrence has tested positive for COVID-19.” Trevor Lawrence has been ruled out against Notre Dame due to COVID-19 protocols.

I am all for safety but I think I speak for all college football fans when I say I am incredibly disappointed that COVID has denied us of one of the most exciting regular season matchups in a long time. Trevor Lawrence being out doesn’t mean we are not in for a great game. This is still a matchup of two undefeated teams with college football playoff hopes ranked #1 and #4 in country. It is a must win game for the Irish if they want to keep their playoff hopes alive which should no doubt make for some exciting football.

Notre Dame needs to win this game if they want to make the College Football Playoff, period. If they lose to Clemson without Trevor Lawrence at home in South Bend, I believe they have no business being in the playoff and I think the committee will agree with me. Georgia, BYU, Cincinnati, or the Pac-12 Champion could all easily leapfrog Notre Dame for the 4th playoff spot if the Irish were to lose on Saturday. The Irish cannot lose this game and there are plenty of reasons for me to believe that they can win that are not “Trevor Lawrence is out with COVID.”

The Irish have a great defense. They are actually giving up less points per game than the Clemson Tigers through their first six games. The Irish are only giving up 10 points a game in their first season in the ACC. Their offense, led by senior QB Ian Book, has been putting up great numbers and taking care of the football too. Ian Book has 7 Touchdowns and only 1 Interception on the year so far. He also has a great partner in the backfield in Kyren Williams who is averaging 100 yards a touchdown in each game. The Irish have a balanced team that could give Clemson problems on both sides of the ball.

The Clemson Tigers were obviously devastated when it was announced that their star quarterback Trevor Lawrence would not be able to play against Notre Dame due to COVID-19. The Tigers were the undefeated #1 ranked team in the country beating their opponents by an average of 31 points per game including a 73-7 win over Georgia Tech. Last week was Lawrence’s first week out and Clemson had a real scare against Boston College. Luckily for the Tiger’s, Lawrence’s backup Freshman D.J. Uiagalelei was able to overcome a 28-10 deficit and help Clemson stay undefeated.

Uiagalelei had a great stat line in his first start last week too. He threw for 342 yards, 2 touchdowns, and no interceptions. He has a great safety valve in his backfield partner Travis Etienne who is one of the top backs in the country when running the ball and when catching passes out of the backfield. Though Lawrence was obviously their leader, Clemson has talent throughout their team. The Tigers still boast a strong defense that is only giving up 15 points per game. Even without Lawrence the Tigers still pose a huge threat to Notre Dame and their playoff hopes.

Those rushing and run defense stat parallels make this game tough to predict, even with Lawrence sidelined. And, when it comes to passing yards the two defenses are even closer. Clemson is giving up 174.9 yards a game in the air and Notre Dame is giving up 173.5 yards a game in the air. In fact, the only slight edge to be found in the numbers is in points per game. Notre Dame has a slight edge, giving up 10 points per game to Clemsons’ 15. So, with two squads this similar, I believe the smart money is on the team not missing their mega-star QB. Give me Notre Dame plus the 5.5 points vs Clemson.

The Props Network has you covered with NCAA odds shopping for every college football game. Don’t make bet before you shop our comps.

Must be 21+ to bet online. Do you or someone you know have a gambling problem? Call 1.800.Gambler to