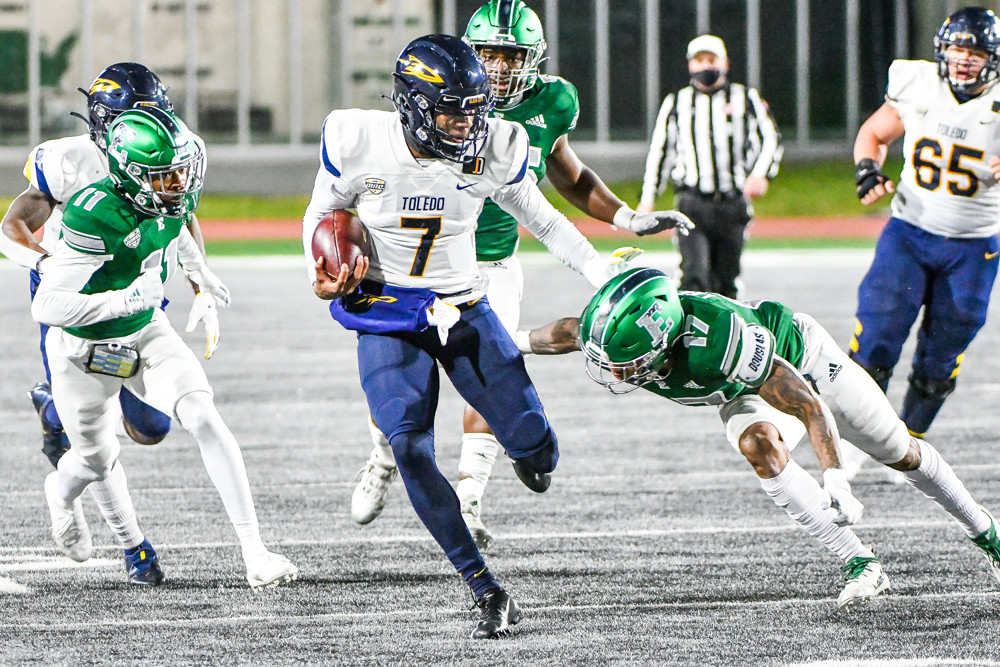 I am very excited for the opportunity for some Saturday MACtion with Ball State vs Toledo. Buffalo and Western Michigan look to be the early favorites to win the MAC, but I think one of the teams in this game is better (spoiler alert: it’s Toledo).
Ball State comes into this game just ahead of Toledo in the MAC West standings. Ball State is also 2-1 but they have looked much less dominate than 2-1 Toledo. Each of Ball State’s two wins came against teams that are 0-3 on the season. They beat 0-3 Eastern Michigan by 7 and 0-3 NIU by 6. They have not dominated in any game they have played this season. Ball State played Eastern Michigan at home and won 38-31. Toledo played Eastern Michigan on the road and beat them 45-28. In the first game of the season Toledo beat Bowling Green 38-3.
Toledo has been statistically stronger on both offense and defense than Ball State too. Ball State has a strong offense and a weak defense. The Ball State offense is putting up over 430 yards per game, but the Ball State defense is also giving up over 430 yards per game. The Ball State offense is scoring 33 points per game, but the Ball State defense is also giving up 31 points per game.
The Pick: The Toledo offense has been significantly better than the Ball State offense and the Toledo defense is one of the best in all the MAC. Toledo is scoring one more touchdown per game than Ball State and their defense is allowing 110 less yards per game than Ball State. Toledo is a much more complete team than Ball State and I do not believe this game will ever get close. I think the Rockets win by double digits on Saturday so give me Toledo -9 for my first MACtion pick of the year.
Stay tuned to The Props Network for more free betting picks and online sportsbook news. And now check out The Props Network YouTube channel for even more sports betting tips, sports talk and plenty of laughs. Follow me on Twitter at @donsengstack.