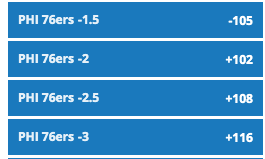 On an ugly shooting night for the Sixers, it was defensive tenacity that won them a close home game over the Cleveland Cavaliers, 98-97. “Led” by Tobias Harris’ 0-11 from long range, Philly clanked its way to an 8-38 mark from three-point-range. They also only out-rebounded the Cavs 46-45, but held Cleveland without a basket for the game’s final three-plus minutes – until Joel Embiid dunked home the winning bucket with 13 seconds left.

Aiding the Sixers effort was the welcome return of Ben Simmons to the starting five. Simmons tallied 15 points, six assists, and five rebounds. Meanwhile, with Al Horford given a night off for rest, Joel Embiid stepped up to score 27 points, and haul in 16 rebounds. He also had two of Philly’s eight blocked shots, compared to none by Cleveland. The home team also won the assist battle 24-13, but lost the turnover war 13-14. All in all, a sloppy first night of a home-away back-to-back.

With two face-saving home wins in the books, the Sixers hit the road again in Orlando, with an eye on snapping a three-game skid away from Philadelphia. The emotional narrative will be the match-up against their 2017 number one draft pick, Markelle Fultz. Fultz has worked his way into the Magic’s starting point guard job. He’s averaging 9.7 points on 47% shooting, but only hitting 17% from three-point range.

Overall, Orlando is weak from three point range. Evan Fournier leads the team with an average of two makes a game at 40% accuracy. Their strength is interior scoring, led by Nicola Vucevic’s 17.1-point average, and aided by Aaron Gordon and Jonathan Isaac’s 13.6 and 12.1, respectively. That will be a larger-than-usual factor against Philly. Joel Embiid will rest, after playing last night – and may be joined by Ben Simmons. However, Al Horford returns after a night off, and Tobias Harris will likely be the offensive focal point in what looks to be a close game.

Beyond this being the second half of a back-to-back, removing Embiid from a match-up with an interior scoring front court like Orlando’s hurts Philly’s chances. But, this season has shown Horford and Harris to be admirable back-ups. Both are capable of picking up the defensive slack, with some rebounding help off the bench from Kyle O’Quinn. Now, add to that the valuable shooting of sixth man Furkan Korkmaz, and the scoring drives of guard Josh Richardson, against a very spotty-shooting Magic squad, and I think the Sixers win as a one point favorite tonight.

PointsBet offers the best odds at the moment for Philly as -1 point favorites, with the payout at -105 ($105 wins $100). Meanwhile, Sugarhouse and Unibet are both offering the same wager with a -109 payout.

With such a narrow point spread for Philly, there are some tempting alternate spreads to take a shot on. At SugarHouse and Unibet, you can bet the Sixers at -3 points with a +116 payout (that’s $100 to win $116).

Philly didn’t hit many threes last night, but they are a team that loves to shoot them every game they play. That’s why it’s well worth partaking in Pointsbet’s ‘make it rain’ booster on all Sixers games. Just bet $100 on the pre-game spread, and PB automatically applies this promo. You’ll make $3 per three-pointer made by the Sixers (or Orlando if you take them). Even if Philly falls short of the win, all of their three-pointers pay off to you. The promo is also available on all Knicks and Nets games, until further notice.

Stay tuned to The Props Network for NBA betting news and the best odds on all Sixers games.