Missing the NBA? Check out these top basketball movies of all time. 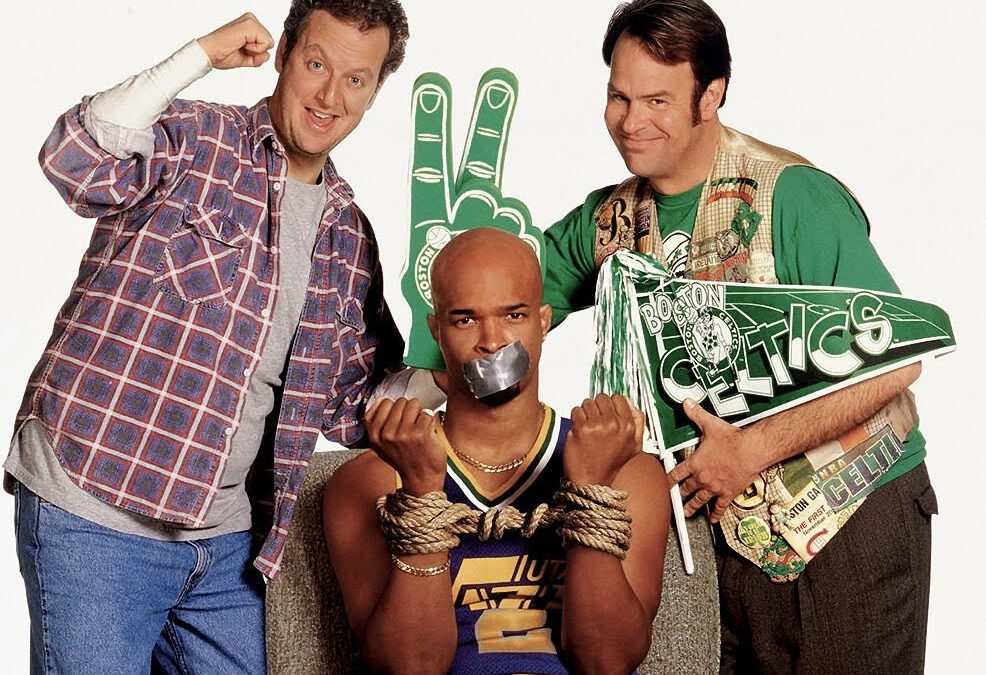 The NBA in the Movies. A Cure For Your Basketball Blues.

Basketball has been a popular film genre for decades. There are classic movies about hoops in high school (Hoosiers), college (Blue Chips), pro leagues (The Fish That Saved Pittsburgh), semi-pro leagues (Semi-Pro), and even the street ball hustling scene (White Men Can’t Jump).

It wasn’t until the mid-1990s that real NBA teams and their players started making regular feature appearances in Hollywood movies.

In honor of the new (suspended) NBA season, let’s look at 12 times that the NBA went to Hollywood.

Note: A gym teach and a plumber, who are huge Celtics fans, kidnap the star shooting guard of the Utah Jazz ahead of the two teams playing Game 7 of the NBA Finals.

Note: New Jersey Nets star player, Common juggles the affections of his NBA trophy wife (Paula Patton) and her physical therapist sister (Queen Latifah), during the 2008-09 season. Fans had three more seasons to enjoy the happy ending, before the team moved to Brooklyn.

Note: Omar Epps is the son of an L.A. Clippers star shooting guard, who then grows up to play for the Lakers, tears his ACL, loses a game of one-one to his future wife. and retires to watch her be a star in the WNBA. Yep, it’s a looong way from that Juice ending.

Note: The dysfunctional Knicks are turned around by the brassy coaching style of a female limo-driving super-fan, who gets them to the playoffs. The film ends before the team can then blow all that hard work and good will against, oh, let’s say the Miami Heat.

Note: A high schooler accidentally steals Kevin Durant’s basketball talent, then returns the talent, becomes a mediocre player, does not go to Golden State in 2016 to make $26.5 million. Lesson: When you magically leech away a superstar athlete’s talent, MAKE THAT MONEY.

Note: Two years after the greatest Phoenix Suns team of all time fell to the Chicago Bulls in a six-game NBA Finals, this film portrays Charles Barkley hitting a last-second shot in the Western Conference Finals to beat the San Antonio Spurs, sending the Suns back for another shot at that elusive title… only for his bucket to be overturned by Billy Crystal’s killjoy referee. It’s only 83 seconds of the film, but it’s worth it for an arena full of Suns fans all chanting “Bullshit!” at Billy Crystal — He. Is. “Turrible.”

Note: A year after Barkley threw a punch at Bill Lambeer in a scuffle in Detroit that cost both men a game suspension and a $20,000 fine, their mutual animosity was immortalized in a film sight gag, where they mixed it up again.

Note: Moonlighting as mild-mannered airplane co-pilot Roger Murdock, a boy’s father-informed criticism of his defense finally makes the NBA All-Star center snap: “I’ve been hearing that crap ever since I was at UCLA. I’m out there busting my buns every night. Tell your old man to drag Walton and Lanier up and down court for 48 minutes.”

Note: Kid from the gritty streets of Harlem. 6’9″ with his afro. Pretty good dribbler. As Kareem Abdul-Jabbar tells it, “He boxes out for us. Gets the tough rebounds. Does the tough things that we need to win. It’s great working with him. I don’t know where we’d be without him.”

Note: James’ relationship advice for best friend, Bill Hader: “You gotta go for it. You need to focus if you wanna take it to the next level. You’ve gotta give it everything you got, if you want this one, man. It’s like, when I lost the championship in 2011, I worked on my game twice as hard, worked on my post-up game, and we wound up winning the championship… twice.”

Note: Yeah, beating the Monstars shows Jordan can defeat aliens on the court with the right supporting cast of Looney Tunes and Bill Murray. But it’s the film’s music video-style opening credits that reminds theatergoers of the lifelong greatness of “His Airness”

Note: I was really tempted to pick Shaq’s wig-wearing cameo in Jack & Jill, where he hawks ham with the line, “A ham this good only comes once a generation. I give this ham four rings.” But instead, I went with him having to sink a life-saving free throw to bypass an insidious Saw-style trap that threatens both him and Dr. Phil.

Did I miss one of your favorite Basketball Movies? Comment and let me know!

Must be 21+. Gambling Problem? Call 1-800-GAMBLER if you have a gambling problem.picks.