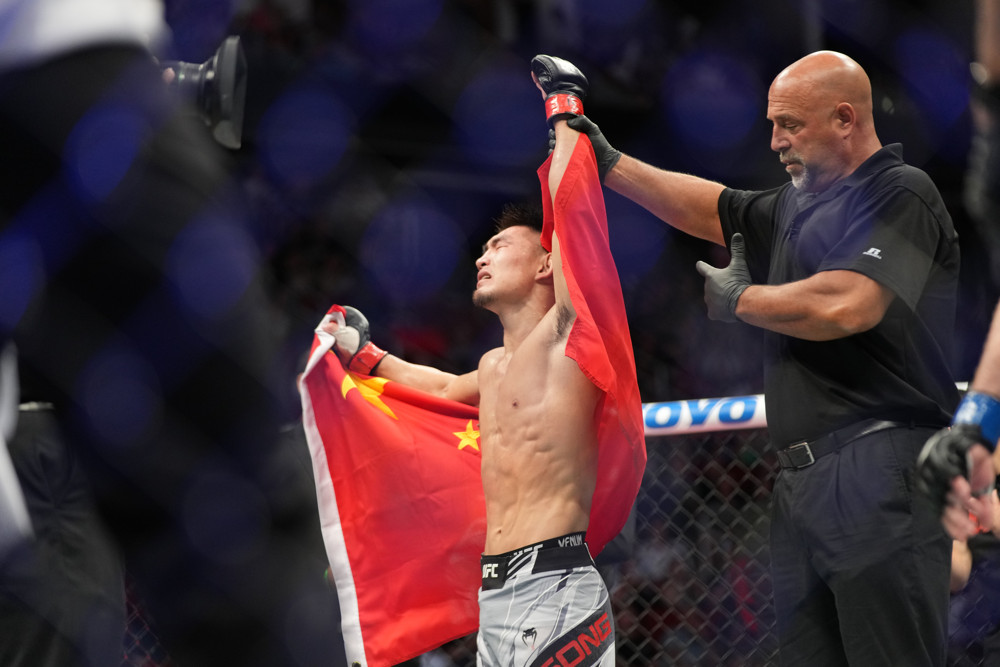 We are coming off of one of the best PPV events of the year in UFC 279. The main event between Nate Diaz and Tony Ferguson absolutely delivered on all levels. We also saw the dominance of Khamzat Chimaev on full display as he finished Kevin Holland in round 1. There was tons of excitement throughout the entire event.

Up for this weekend, we are back at the UFC Apex for a bantamweight showdown between #4 Cory Sandhagen and #10 Yadong Song which should be a fun one. The rest of the card has a ton of potential and one you will not want to miss out. With that said, let’s take a look at this week’s UFC betting preview for Props HQ presented by Playmaker Betting.

The first fight on the main card is a fight in the heavyweight division between Tanner Boser and Rodrigo Nascimento. These two were scheduled to fight back in April until Nascimento had to withdraw from the contest. Now here we are 5 months later and the first action for both fighters in 2022.

This is a classic grappler versus striker matchup as Boser likes to keep this fight at distance, meanwhile Nascimento does his best work on the mat. Boser has had the tendencies to get taken down in previous fights but that was against stiffer competition than Nascimento.

I don’t believe Nascimento has enough striking defense to not eat shots to close distance to take this fight to the mat. Ultimately, this fight should be largely contested on the feet where Boser should have the distinct advantage to out-strike Nascimento to a decision.

In the middleweight division, we have a fight between Contender Series standout Joe Pyfer and Alen Amedovski. Pyfer fresh off of his brutal round 1 Contender Series knockout will be looking to have repeat success in his UFC debut. Amedovski on the other hand is still searching for his first win inside the octagon as he is currently 0-3 in the biggest promotion.

Pyfer has a distinct size advantage in height (6’2″ > 5’10”) and reach (75″ > 74″) and he will put that to good use against Amedovski. This is just a terrible stylistic matchup for Amedovski to get his first win in the UFC. So it’s hard to see it going any different than his previous fights. In short, Pyfer does as he pleases and gets the job inside two rounds.

In the men’s featherweight division we have a fun fight between Andre Fili and Bill Algeo. Fili is looking for a win as he hasn’t had a win since June 2020 against Charles Jourdain. Meanwhile, Algeo is coming into this fight winning two in a row but he is also taking this fight on short notice.

Even though Fili has had some rough times as of late, he still has a distinct advantage on the feet against Algeo. Where Algeo excels is with his toughness, durability and being able to overwhelm his opponents for 15 minutes. Those attributes have been great against lesser competition but that won’t be enough against Fili.

You can fully expect a war between these two and it will come down to who wants it more in the end. In short, Fili keeps this fight on the feet and range as he picks apart Algeo for a wide decision victory.

In our co-main event, we have an absolute banger in the middleweight division as Chidi “Bang Bang” Njokuani and Gregory “Robocop” Rodrigues battle it out. Both fighters are riding some momentum coming into this matchup and are looking to keep it going this weekend.

Njokuani really made a statement in his UFC debut by knocking out Dusko Todorovic in the very first round. That didn’t come without adversity though, as he was taken down and was in a precarious position on the mat. That is where the trouble may lie in this matchup against Rodrigues.

If Rodrigues were to fight smart he will attempt takedowns and use his Brazillian jiu-jitsu black belt to potentially get the submission victory. That has shown to be the glaring weakness of Njokuani but whether or not Rodrigues will go the easy route is hard to predict.

So the fight can go one of two ways, Njokuani gets another impressive knockout after some back and forth exchanges on the feet or Rodrigues takes him, takes his back and submits him. It’s hard to really gauge which is more likely to happen which makes it one of the tougher fights to predict. Nonetheless, this fight has fireworks written all over it and you will not want to miss it.

In our main event, we have a bantamweight showdown between two of the divisions best in #4 Cory Sandhagen and #10 Yadong Song. Sandhagen is looking to get back on track after a controversial loss to title challenger TJ Dillashaw. Meanwhile Song is riding high coming into this fight as he is on a 3-fight winning streak.

Sandhagen even though he lost against Dillashaw, looked really good in that matchup. He was able to land at will at range, busting up Dillashaw in the process. It was his defensive grappling and not being able to get off the cage, which led to his downfall on the scorecards. Fortunately for him we can expect Song to his kind of fight.

Song is one of the most powerful strikers at 135 lbs, winning his last two fights by brutal knockout. He does very well closing the distance and cutting off the angles of the cage to land his devastating power shots. With that said, Song does have some troubles as the fight progresses. He tends to slow down mightily as we saw in his last 4 fights that have seen a 3rd round.

Sandhagen should have a big advantage once it hits round 3 and on. He has the cardio to fight hard for 25 minutes and he has the experiences doing so. Ultimately, Song shows some glimpses of being a contender early on until Sandhagen takes over picking him apart to either a late finish or a unanimous decision victory.