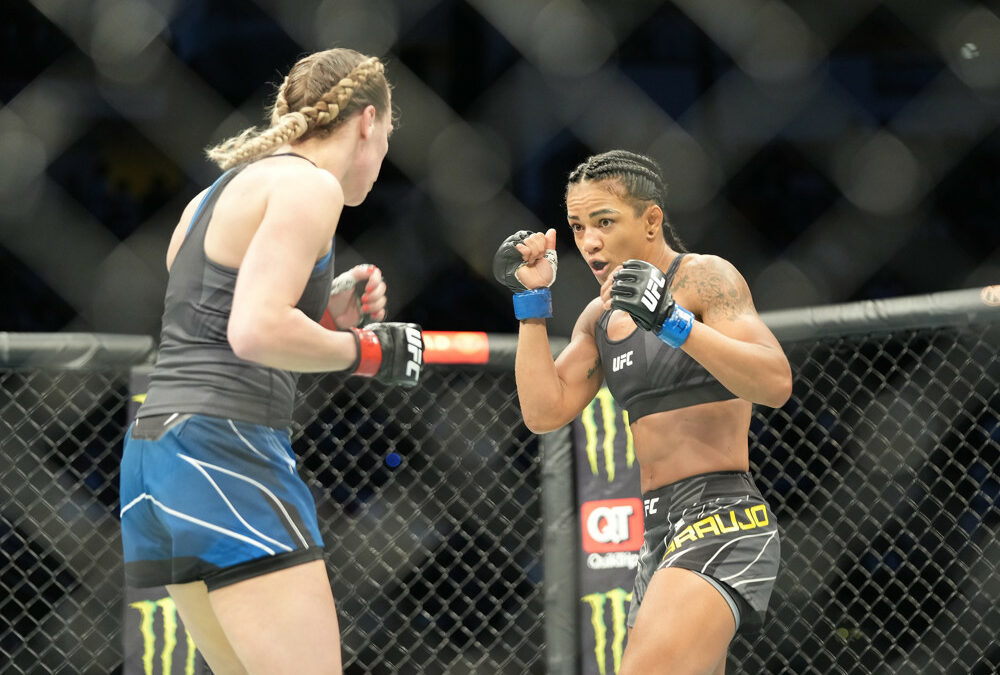 The UFC is back after yet another small one-week hiatus. It is not often we have multiple weeks off in a short span but don’t worry there isn’t another week off for quite some time. On deck for this week is an Apex showdown between two of the women’s flyweight division best as #5 Alexa Grasso takes on #6 Vivane Araujo.

We may have lost 3 of the biggest fights on this fight card but there are still some exciting fights nonetheless. Also whenever there are fights, there is money to be made. With that said, let’s take a look at this week’s UFC betting preview for Props HQ presented by Playmaker Betting.

To start the main card, we have a middleweight showdown between Dusko Todorovic and Jordan Wright. This is a great way to kick off the main card as these two fighters come to put on a show win or lose.

I fully expect one of these fighters to get finished in this matchup. As both have the tendency to either get finished or get the finish. If we believe that a finish is likely, then we would have to side with Todorovic in this matchup. He has more paths to victory than his counterpart Wright.

That doesn’t mean Wright isn’t dangerous because he is as we have seen in the past. It’s just that Todorovic has shown to be the cleaner striker and the much better grappler of the two. Ultimately I see these two mixing things up on the feet until Todorovic drags this fight to the mat and gets the rear naked choke finish.

Askarov came up short in a hard-fought loss to former title challenger Kai Kara-France and is looking to get back on track this weekend against the dangerous Royval. Although Askarov’s striking has progressed as his career has gone on his whole game is predicated on dragging his opponents to the mat and dominating them there.

Royval on the other hand thrives in chaos and is willing to risk putting himself in bad positions to finish his opponents. This is one fighter Royval can’t do that against and come away with a victory. Askarov will drag Royval to the mat, weather the early scrambles, and eventually finish Royval late or get the unanimous decision victory.

In our co-main event, we have long-time featherweight Cub Swanson making his bantamweight division debut as he takes on the surging Jonathan Martinez. Martinez is coming into this fight riding a 3-fight winning streak meanwhile Swanson is 2-1 in his last 3 and is looking to make one last title push.

This has the makings to be a banger of a fight as these two fighters come to throw down every chance they get. Some may say that Swanson is slowing down and is on his last legs but he has shown he has a lot left in the tank.

This is will be the toughest task to date for Martinez and with a win here we could see him get a shot to be in the rankings next. I expect this fight to play out a bit closer than the odds suggest but ultimately the youth, cardio, and volume of Martinez will be deciding factors in this matchup to get the win over Swanson.

In the main event for this weekend’s fight card, we have a women’s flyweight matchup between two title contenders in #5 Alexa Grasso and #6 Viviane Araujo. Both fighters are coming off wins and are looking to put their name in the mix for a potential title shot next.

Alexa Grasso has really made the transition to the flyweight division flawlessly. She is now 3-0 in her new division and is coming off of her most dominant performance yet against former title challenger Joane Wood. She has shown drastic improvements in her game that make her a legit threat to Valentina Shevchenko.

Even with that high praise of Grasso, Viviane Araujo is no easy task. She is one of the more dynamic fighters in the division that has the power and movement to beat you on your feet and the grappling to take it to the mat and finish you there.

The problem lies with the cardio of Araujo as it has failed her in the past. This will also be her first 5 round fight which puts her at an even bigger disadvantage. It all boils down to Grasso’s defensive grappling. If it holds up to the test then she will finish Araujo in the latter portion of this and solidify herself as a true contender.