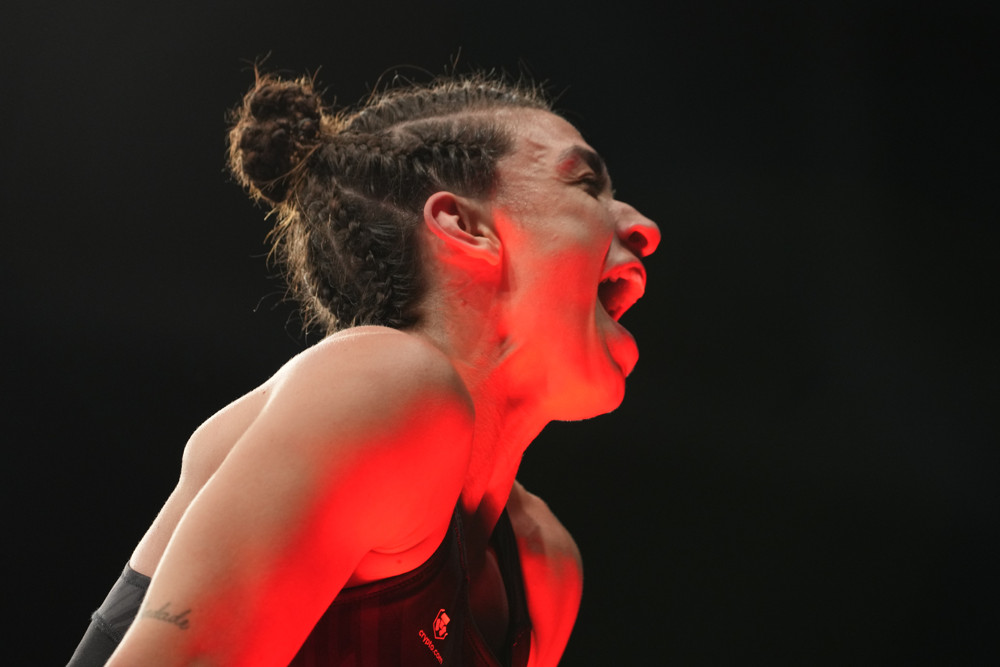 After a one-week break, we are back at it with a jam-packed fight night headlined by two strawweight contenders in Mackenzie Dern and Xiaonan Yan. Both fighters want to make a statement with a main event win this Saturday night. We also have a banger in the co-main event spot as Randy Brown takes on Francisco Trinaldo.

A lot of the fights on this fight card have the potential to steal the spotlight, which should make for an exciting night of fights throughout. With that said, let’s take a look at this week’s UFC betting preview for Props HQ presented by Playmaker Betting.

In our first fight on the main card, we have the return of Mike “Beast Boy” Davis taking on “Slava Clause” Viacheslav Borshchev. Davis is coming off of a two-fight winning streak but has fought in 21 months. Meanwhile, Borshchev just fought 7 months ago but lost to Marc Diakiese.

This has the makings of a potential fight of the night candidate as both strikers are willing to throw down in the center of the octagon. Davis packs much more punching power but Borshchev is the more flashy striker with a wide array of techniques.

One glaring weakness of Borshchev is his defensive grappling which Davis could exploit. We have seen him land 5 of his 11 takedown attempts (45% success rate) in his last 2 fights which should bode well for him in this matchup. Given the short-notice nature of this fight for Borshchev, it is going to be hard for him to overcome the challenge that is Mike Davis in front of him.

In the bantamweight division, we have a banger between John Castaneda and Daniel Santos. Both of these fighters are high-octane strikers with the power to put any of their opponents unconscious. Casteneda is looking to make it 3 in a row meanwhile, Santos is looking for his first win inside the octagon.

In his UFC debut, Santos seemed to be a bit flat and didn’t look like the best version of himself. Julio Arce was able to avoid all of the flashy spinning attacks of Santos which eventually slowed him down as the fight progressed.

Casteneda on the other hand is coming off of two finishes of Miles Johns and Eddie Wineland. He seems to be the more well-rounded fighter as his 14 wins inside the distance as split evenly by knockout and submission.

Being as this fight will be fought at a catchweight of 140 lbs, I do believe it favors Casteneda, especially in terms of grappling. If he can mix in the takedowns along with top control and ground and pound, he can extend his winning streak to 3.

In the featherweight division, we have “Super” Sodiq Yusuff welcoming promotional newcomer Don Shainis to the UFC. Yusuff was slated to face Giga Chikadze two weeks ago but had to withdraw from the fight due to an injury.

Shainis is the former Cage Titans Featherweight Champion as well as the FAC Lightweight Champ. He is a finisher by nature with 10 of his 12 wins coming inside the distance with 8 by knockout. Unfortunately for him is that Yusuff is a massive step up in competition from the regional fighters he has faced.

Yusuff is coming off of a hard-fought win against Alex Caceres and is looking to make it two in a row against the newcomer. Can’t see how Yusuff loses this fight against a much less inferior opposition he’s faced in his career. Also at the current odds, the oddsmakers have the same sentiment. Yusuff should be able to keep this fight on the feet and at range just picking apart Shainis for the vast majority of this fight.

In the bantamweight division, we have a fight between Raoni Barcelos and Trevin Jones. Both fighters are in a bit of rust as of late losing each of their last two fights and they should be hungry to pick up a win on Saturday.

There was a ton of hype surrounding Barcelos early in his UFC career as he rattled off 5 straight wins. Since then he is now 0-2 with only 2 fights in the last 2 years. He is also getting up there in age at 35 and it really showed in his last fight against Victor Henry.

Jones also came into his UFC career guns blazing with back-to-back upset wins against Timur Valiev (that got overturned due to a failed drug test) and Mario Bautista. He has since gone 0-2 like his counterpart against up-and-coming prospects in Javid Basharat and Saidyokub Kakhramonov.

On paper, this is a winnable fight for Barcelos but then again so was Victor Henry. He should be winning the early rounds with high output and fast combinations, but it’s when the fight hits the later rounds where Jones could capitalize. Unless Jones pulls off another big upset, Barcelos should have his way on the feet en route to a wide decision victory.

In our co-main event, we have a welterweight showdown between “Rudeboy” Randy Brown and Francisco Trinaldo. Brown has been surging as a legitimate title contender as of late meanwhile, Trinaldo just defies father time as he is 4-1 in his last 5 fights.

Brown has really come into his own as of late winning each of his last 3 fights, most recently beating a tough Khaos Williams. There were some sweaty moments in that fight but Brown was able to weather the early storm and take over as the fight progressed.

Trinaldo just doesn’t seem to have lost much of a step even at age 44. Even when we think Trinaldo is done, he is still able to fight at a high level and beat fighters that 10+ years younger than him. He has a tall task ahead of him against the long and rangy Randy Brown.

Brown will have a significant size (6″ height) and reach (8″ reach) advantage that just might be too hard for even someone as skilled as Trinaldo to overcome. As long as Brown is able to avoid the looping power shots of Trinaldo, he should be able to pick him apart on the outside for a wide decision victory.

In the main event, we have two title contenders in the strawweight division as #5 Mackenzie Dern takes on #6 Xiaonan Yan. Both are coming off of controversial decisions in their last fights. Dern won via split-decision against Tecia Torres meanwhile, Yan is coming off of a split-decision loss to Marina Rodriguez.

We know that Dern’s biggest strength is her submission game as she is the most accomplished grappler in all of women’s MMA. Over the years she has been working closely with Jason Parillo who has transformed her non-existent striking into something serviceable. She now can complement her striking along with her grappling which makes her one of the harder fights in the division.

Yan on the hand is one of the best strikers in the entire division and it showed in her last fight against Rodriguez that most thought she won. She was able to beat Rodriguez for a good amount of the fight at her own game and the sprawl-and-brawl game will be put to the test in this matchup against Dern.

If Yan’s defensive grappling hasn’t gotten better since the Carla Esparza fight then she is in for a rude awakening. Dern doesn’t also need to land a takedown to get the fight to the mat, she can grab a limb and just drag it there if need be. Ultimately, I think Dern has the striking to keep this closer than most suggest on the feet and one takedown could just be enough for Dern to snatch a limb for another submission victory.