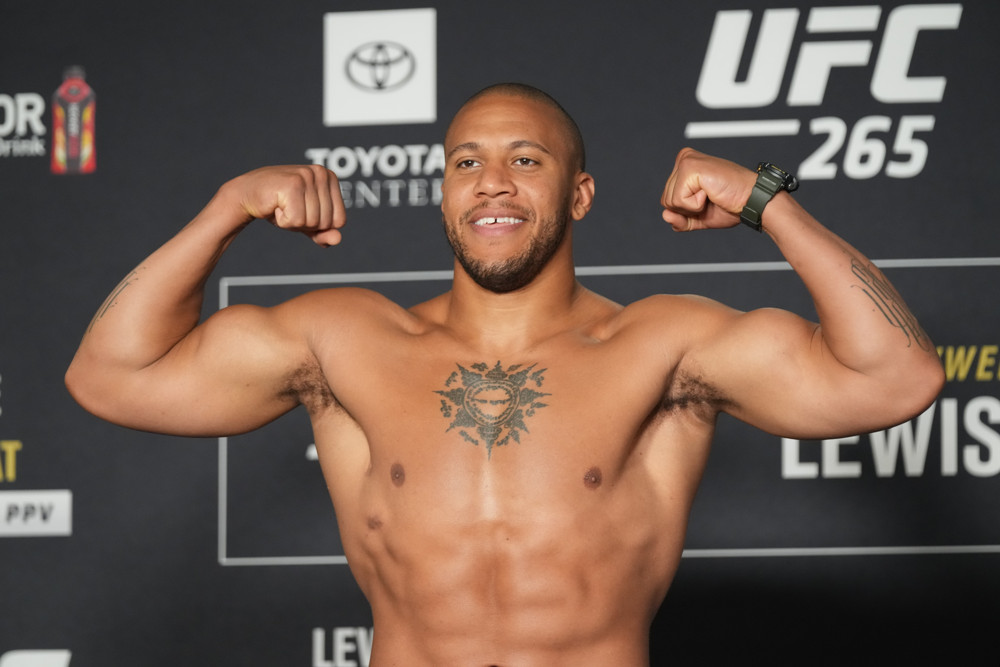 After a week hiatus, the UFC is back in action and making its debut in Paris, France as two heavyweights collide in the inaugural event. Ciryl Gane returns to the cage after his title loss as he takes on the surging Tai Tuivasa. You can expect a back-and-forth battle between these two top-ranked heavyweights.

The rest of this fight card is stacked top to bottom with elite talent which should make some great fights all throughout. There are a lot of great spots betting-wise coming into this weekend. With that said, let’s take a look at this week’s UFC betting preview for Props HQ presented by Playmaker Betting.

To kick off the first ever UFC fight card in Paris, France we have a women’s featherweight matchup. We have promotional newcomer Ailin Perez (7-1) taking on Stephanie Egger (7-3) who’s stepping in on short notice. Egger is coming off of a quick first-round loss at the hands Mayra Bueno Silva meanwhile Perez is a winner of two straight.

The tape shows Egger has a clear advantage in the clinch and on the mat as she is a judoka black belt with some good grappling chops. Perez has shown to have an aggressive style of fighting but she has yet to face someone as big and as physical as Egger in her young career.

This is a pretty big step up for Perez and this might be the fight that Egger can get back on track. The only problem is Egger’s lack of fight IQ which always gives her opponent the opportunity to beat her. Expect this fight to be closer than it is on paper until someone pulls away late.

In the bantamweight division, we have Khalid Taha (13-4) welcoming newly signed Dana White’s Contender Series alumni Cristian Quinonez (16-3) to the UFC. Taha has been on a bit of a skid only winning 1 out of his 5 fights and not having a win since 2018. Quinonez on the other hand is coming into his debut riding a four-fight winning streak.

Each fighter has the ability to finish one another which makes this an exciting fight for the fans. Taha’s recent run, albeit against good competition, and the current moneyline may be indicators that his run with the UFC may be just about up. Look for both fighters to lay it all on the line Saturday night.

In the lightweight division we have a clash between two fighters trying to make a name for themselves inside the octagon. Benoit-Saint Denis (9-1) will look to keep his winning ways going as he takes on promotional newcomer Gabriel Miranda (16-5) who is stepping in on short notice.

Both fighters are submission specialists as they combine for 23 submission victories between the two of them. This could possibly make for a great grappling match or it’s possible we see the grappling cancel itself out and have a 15-minute striking affair.

On the feet, it shows that Saint-Denis has the power advantage while Miranda is more technically sound. The line seems to be a bit wide here as this fight could truly be anyone’s fight and I expect it to be close until someone gets finished.

This is one of the sleeper fights on the fight card as two surging middleweights collide. France’s Nassourdine Imavov (11-3) takes on hard-hitting Joaquin Buckley in a fight that should produce fireworks from start to finish.

Imavov has been looking like a true contender with back-to-back finishes of legitimate competition in Ian Heinisch and Edmen Shahbazyan. On the flip side, Buckley has won 5 out of his last 6 and is riding a 3-fight winning streak coming into this high-profile matchup.

I expect this fight to be fought primarily on the feet in which Imavov has a distinct advantage with his versatility and length. Where Buckley has the advantage it’s with his power, speed, and grappling which could make this a very dangerous fight for Imavov. Each fighter has the ability to end this fight at any given moment which is what makes this fight one of the more exciting fights on the fight card.

In the lightweight division, Frances own Fares Ziam (12-4) welcomes England’s undefeated prospect Michal Figlak (8-0) to the octagon. Ziam hasn’t had his fair share of octagon success as of late, coming off of a beatdown against the dangerous Terrance McKinney meanwhile, Figlak has been dominant throughout his professional career.

Each fighter is well-rounded as they can both strike and grapple when needed but their area of expertise is in striking. We should see a close striking battle between these two early on until the pace and the speed will help one of the fighters pull it off late to get the win.

In the featured bout on the preliminary card, we have the octagon debut for middleweight prospect Abusupiyan Magomedov (24-4-1) taking on Dana White’s Contender Series alumni Dustin Stolzfus (14-4). Stolzfus just has had a murderous row of opposition in his short stint in the UFC which has saw him amass only a 1-3 record.

Unfortunately for him, things will not get any better as he takes on Magomedov who has fought the who’s who on the Eastern European circuit coming into his debut fight. Magomedov has the opportunity to put his name on everyone’s radar with a dominant win here this Saturday.

What a great way to kick off the main card by having two of the most exciting featherweights in the division battle it out. Charles Jordain (13-5-1) takes on Nathaniel Wood (18-5) in a fight everyone expects to be an absolute barn burner.

Jourdain is coming off of a hard-fought close decision loss to Shane Burgos his last time out and is looking to get back on track. Meanwhile, Wood is looking to keep his momentum going after successfully moving up in weight and absolutely mauling Charles Rosa in London.

On the feet, Jourdain has the power and length advantage but Wood makes up for his lack of size with his speed and his grappling. This fight truly can go either way, which is why the line is so close. Just sit back and enjoy the festivities on this one because it’s going to be insane.

To kick off the first ever UFC fight card in Paris, In the men’s featherweight division we have the promotional debuts of France’s William Gomis (10-2) and Dutch fighter Jarno Errens (13-3-1) in a fight that could truly surprise a lot of people.

These two come to throw down right from the get-go, as they both combine for 14 finishes. That should make for a closely contested fight between these two competitors. It seems as if Gomis will want to keep this fight on the feet and at range where he has the clear advantage whereas Errens will want to get this fight to the mat to sink in a submission.

Look for this fight to be a back-and-forth battle between two closely contested fighters. Ultimately, you should expect one of these fighters to notch yet another win inside the distance to kick off a great day of fights.

In the lightweight division, we have a fight between two veteran fighters looking to gain some momentum. Nasrat Haqparast (13-5) takes on veteran striker John Makdessi (18-7) in a fight where both fighters are desperately in need of a win.

Haqparast had the daunted task of having to beat both Dan Hooker and Bobby green. Unfortunately, he came up short in both of those fights and will have to face his third striker in as many fights. Makdessi on the hand at age 37 has quietly amassed a 4-1 record in his last 5 fights.

Both fighters are strikers in nature so it’s going to come down to who is going to have the bigger moments. It is hard to say who that will make for an interesting for the fight fans, but particularly hard for bettors.

In the middleweight division, we have a clash between Alessio Di Cherico (13-6) taking on Roman Kopylov (8-2). Both fighters are desperately in need of a win that should bring out the best in each to get the win.

Di Cherico is searching for only his second win in the last 4 years meanwhile his opposition Kopylov is looking to secure his first octagon win. This could be a case where the loser gets their walking papers, if not both if the fight really is lackluster. Hard to gauge who shows up on fight night, making this one of the trickier fights to bet on come Saturday.

In the co-main event, we have two of the middleweights on the planet going at it. As former title challengers, #1 Robert Whittaker (23-6) and #3 Marvin Vettori (18-4-1) battle it out to get back into title contention.

Whittaker is coming off of his most recent title loss against Israel Adesanya that was razor close to the very end. He showed why he is still leaps and bounds better than everyone in the division not named Israel Adesanya. Meanwhile, Vettori got back on track with a unanimous decision victory over Paulo Costa.

It just seems like the two head honchos of the division Adesanya and Whittaker have shown they are levels above the division. Vettori will try to stake his claim as a title contender again with a big win against Whittaker. It will be interesting to see who puts their name in the mix for another title shot.

In the main event, we have a fight between two heavyweight title contenders, #1 Ciryl Gane (10-1) and #3 Tai Tuivasa (15-3). Frances’s Gane is back in the octagon after failing in his bid for gold dropping a decision to the champion Francis Ngannou. Meanwhile, Tai Tuivasa is the hottest heavyweight right now coming off 5-straight knockout victories.

Tuivasa can knock out anyone in the heavyweight division with one single punch but that is easier said than done against one of the more prolific kickboxers in that said division. Many have tried to land on Gane and couldn’t, even the most feared man in Ngannou couldn’t put him away.

It ultimately could be a rough night in the office for Tuivasa but with that said, his ever-changing power can turn any fight around in the blink of an eye. You’re not going to want to take your eyes off of the screen during this fight or you might just miss it.