UFC 252: Best Bets and Top Props From Our Fight Analyst 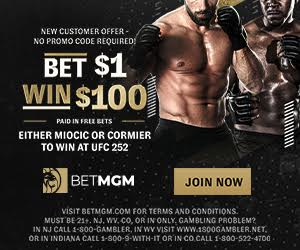 Cormier vs Miocic is the Main Event On a BIG Card this Week in Las Vegas.

Story of the Card – UFC 252 is one of the most anticipated cards of the year. The main attraction is Daniel Cormier vs Stipe Miocic for the heavyweight championship of the world and unofficial title of baddest dude on the planet. This is more than just a title fight. This bout could go a long way in clearing up the debate on who the UFC heavyweight GOAT is (apologies to Cain Velasquez). In addition to the heavyweight title, Sean ”Sugar Show” O’Malley is also on the card in the co-main event vs Marlon Vera, as O’Malley attempts to continue his rise through the bantamweight division.

At least inside the cage, 2020 has been a great year for the Burns family. Herbert Burns, brother of top welterweight Gilbert Burns, has 2 finishes this year and seems to be putting it all together at age 32. Daniel Pineda is back in the UFC after 6 years away and some impressive victories in the PFL. But Burns is the favorite here and for good reason.

Burns should be the bigger man and I see him as the as the better fighter in every facet. He’s better on the ground and on the feet. Burns is maybe not as flashy or exciting a striker as his highlight reel KO of Nate Landwehr would have you believe. However t he is still heavy handed and should get the better of this matchup.

The Pick: I like Herbert Burns -264 at BETMGM SPORTSBOOK. It’s a big moneyline to swallow on Its own but a good leg for a parlay.

A rematch with bad blood is always appointment viewing in MMA, and two huge and powerful strikers are facing each other for a second time here after the first fight ended via an controversial stoppage.

Cutelaba ate a head kick and appeared wobbled but was still firing back at Ankalev when the ref jumped in. After watching the replay it looked like the referee jumped the gun and Cutelaba might have been playing possum.

Cutelaba was furious and this rematch feels like a “make it right booking” which is great news for fight fans. The first fight was all action for as long as it lasted.

What’s the matchup outlook this time? Ankalev is still the more technical and well rounded fighter but Cutelaba has huge power especially early. I could see him catching Ankalev at the beginning of the fight and for me that makes him a very live dog.

The Pick: My money is on Ion Cutelaba +240 at BetMGM Sportsbook.

Sean O’Malley is one of the hottest fighters in MMA today. He has beautiful creative striking. Plus, he’s on a bit of a hot streak with recent first round KO’s of Jose Quinonez and Eddie Wineland. But, this week’s matchup with Marlon “Chito” Vera should help sort out whether contender or prospect is a more accurate description for “The Sugar Show”.

Chito Vera is a real step up in competition for O’Malley. You could argue he deserved to get the decision in his last fight and before that he had won his last 5 fights, all by finish.

The Pick: “The Sugar Show” is must watch but I like the value of a bet on Vera. I’ll take Marlon Vera +240 at PointsBet.

Top Prop: If Chito Vera wins this fight I think it’s going to be by making it messy and getting in the clinch or on the ground with O’Malley. I could see him edging out a decision and I like the value here at FanDuel Sportsbook. I’ll be on Vera Wins By Points for a +600 payout.

A key number in O’Malley vs Vera is 5. That’s the number of finishes for Marlon Vera in his 5 fight winning streak preceding his decision loss to Song Yadong. That one arguably could’ve gone Vera’s way and he would be riding a 6 fight winning streak right now.. Don’t sleep on the Ecuadorian.

This is the main event and arguably a fight that will tell us who the greatest heavyweight of all time is. Plus this is a trilogy fight and while there’s not necessarily bad blood between these two, there’s certainly some lingering animosity. The first two fights were split evenly, with Cormier winning by first round knockout in the first fight and Stipe getting revenge with a 4th round TKO in the 2nd.

DC has said he intends to utilize his wrestling more this time against Miocic, which may prove especially effective with a smaller cage in use at the UFC Apex. If Stipe can utilize his reach and body punching to slow DC down or if DC gasses attempting to wrestle Stipe, an underrated wrestler, I see this going Stipe’s way. DC won the first fight with a beautiful punch out of a clinch that Stipe never saw coming.

To win I think Stipe needs to stay defensively sound, utilize his reach and maintain the adjustments that won him the 2nd fight. If he does capitalize on the adjustments he made in the rematch, specifically body punching when DC is attempting to handfight, I see Stipe getting his hand raised.

The Pick: For the main event i’ll be taking Stipe Miocic for -105 odds at PointsBet.

Top Prop #1: I think if Stipe wins it’ll be by KO. In a 5 round event with these two styles, I don’t see this going to Decision. Also, nobody has ever submitted DC. I’m taking Miocic to Win by KO for +195 at FanDuel..

Top Prop #2: I can’t see this fight going 5 rounds and I think DC has fallen in love with the knockout. So even if Stipe doesn’t retain the belt I think this fight ends by KO. I’ll be on Fight Ends By Knockout for -175 also at FanDuel.