Say Goodbye To The Sugarhouse Brand 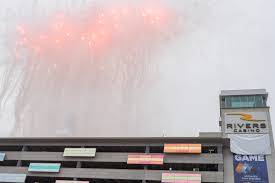 It was announced in June 2019 that Rush Street Gaming’s Sugarhouse casino was getting a re-brand to Rivers Casino to support a $15 Million re-investment into the property and launch of a permanent BetRivers sportsbook. On Tuesday October 28th Rush Gaming formally revealed the re-branded exterior signage with a small display of fireworks.

It has been unclear how the company was going to proceed with the online Sugarhouse Casino and Sportsbook products. What was the companies sentiment on Sugarhouse brand loyalty in the Philadelphia and New Jersey markets? Greg Carlin, CEO and Co-Founder of Rush Gaming made it clear and confirmed at the 2019 Global Gaming Conference in Las Vegas (G2E), the Sugarhouse online brand was completely going away, putting these questions to rest.

We followed up with the online team at Rush Street Interactive to get a better idea how the roll-out will occur for loyal Sugarhouse online casino and sportsbook players in New Jersey. According to RSI insiders, there will be no disruption for online players when the re-branding takes place in December 2019.

Users will be able to login with their same credentials and their account history will not be impacted. This will be a simple re-skin of the existing website. There are no major changes planned to the platform at this time and the user experience will remain the same.

We additionally inquired about the company’s launch plans in West Virginia. With West Virginia currently not allowing an online casino product alongside online sportsbook, RSI is holding off on entry into WV. The word is that the earliest anticipated entry for the company into West Virginia would be February 2021.

The real question is, what are the anticipated plans on re-branding the Sugarhouse Sweeties!? Goodbye Sugarhouse your name will be missed along the Delaware River. Share a Sugarhouse memory or two in the “Casino Life” Forum. Sign up and place a bet while it’s still Sugarhouse!