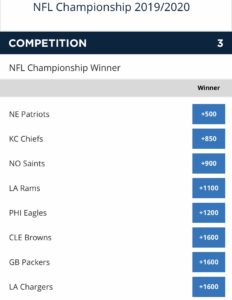 The Raiders sent Antonio Brown packing today, and he signed with the reigning champs a few minutes later.

After signing the star wide out, the New England Patriots Super Bowl odds have jumped from +700 to +500 at Sugar House.

Previously, the Kansas City Chiefs were the favorite to claim the Lombard Trophy.

Does AB really make the Pats that much more likely to win the Super Bowl?

Only time will tell if adding Antonio Brown really makes the Patriots that much more likely to repeat as Super Bowl champs.

Tom Brady’s receiving corps already features the likes of Julian Edelman and Josh Gordon, so adding a mega star of Brown’s caliber is what has book makers scrambling.

Patrick Mahomes and the Kanas City Chiefs were previously the favorite to win it all this year. After the Pats AB move, a $100 bet on the Chiefs to win the NFL Championship this year will now win $850.

Many betters are taking advantage of the increased value on a stacked team.

Let’s remember, the Chiefs were a Dee Ford offsides penalty away from a walk off interception that would have sent them to the Super Bow last year.

Other teams could win too…

The Antonio Brown move has increased value across the board for Super Bowl Odds. The Eagles, Rams, Cowboys and even the Cleveland Browns are popular picks to win the big game this year.

A championship win for one of these longer shot teams would yield a much larger payout than A Pats or Chiefs bet.