Future Props – Betting the Patriots to Go Undefeated and Win the Superbowl. 19-0 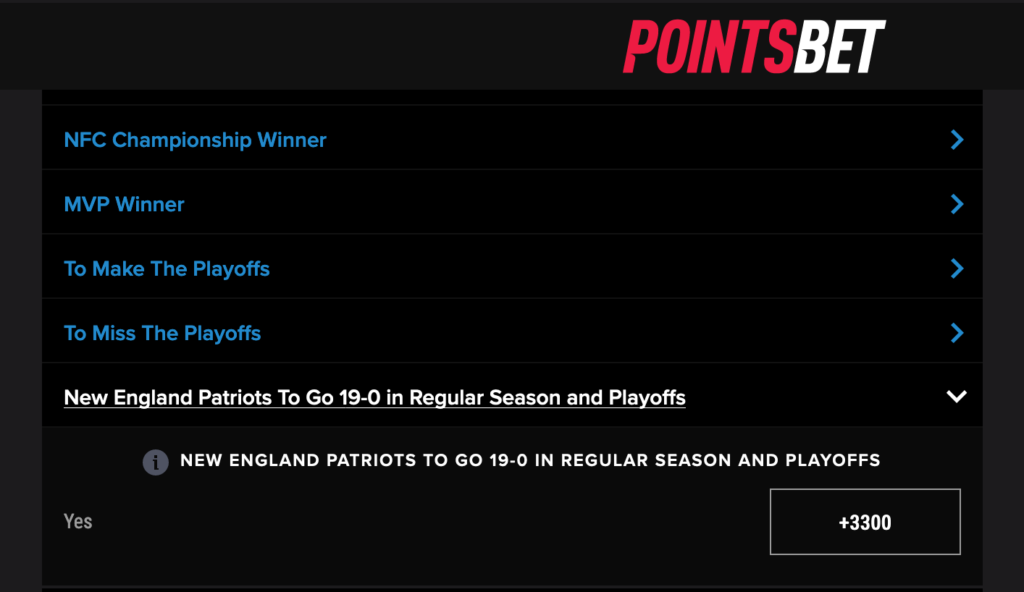 Tom Brady and Co. are off to a hot start this year and all signs point to another Super Bowl run for the defending champions. Many are speculating that a Patriots undefeated regular season is in play this year, followed by a perfect record in the post season.

There are many reasons to believe that the Patriots can go a perfect 19 – 0 and win the Super Bowl this season. They now have a Golden State Warriors approach to free agency, and a similar abundance of offensive weapons. Tom Brady can step back in the pocket and choose from Antonio Brown, Josh Gordon and Julian Edelman. He can also hand off to the likes of Sony Michel and James White coming out of the backfield.

On Defense the Patriots look much improved as well. They have yet to allow a touchdown, and have only given up a total of 3 points to the opposition through 2 games in 2019.

The Pats are Stacked, and they can beat anybody. But, will they go undefeated?

There are 14 more games to go for a Patriots undefeated season.

Out of their remaining 14 games, six games are against teams that have zero chance of sniffing the playoffs. This includes two games against the hapless Jets, the Giants, Redskins, Bengals and the Dolphins at home in week 17.

Four games against contenders, but at home…

Four out of the eight remaining games are against contenders, but they take place at New England where wins are hard to take from the home team. The Pats will be visited by the Browns in week 8, Cowboys in week 12, Chiefs in week 14, and Bills in week 16.

The second half of the season is when the Patriots started to heat up last year on their way to the Super Bowl. So you can expect them to win these games at home.

The Chiefs in week 14 looks like the hardest home game for the Patriots. The Pats won a close game against Andy Reid’s team at Gillette last year.

The Patriot’s schedule features four road games against teams that are expected to make playoff runs; At The Bills in week 2, at Baltimore in week 9, at Philadelphia in week 11 (after the Pat’s bye week) and at the Texans in week 13.

The Ravens and Eagles games look like the most dangerous spots for the Patriots. The Ravens now have a prolific, game-changing offense. And the Eagles look like a top 4 team in the NFC.

But Philly now has injury problems on offense and many predict Carson Wentz won’t survive the season behind their thin offensive line.

Houston and Buffalo just can’t beat these Patriots, even on their home turf.

But won’t the Pats be resting their stars in week 17?

Yes, they probably will, but luck would have it that the Dolphins are their week 17 opponent. The Dolphins starting lineup could not beat the Gillette Stadium hot dog vendors in a football game, and we have seen the Pats win these ‘meaningless’ games without their stars before.

They can win them all…

My prediction is that if the Patriots can survive their trip to Baltimore in week 9, they will ride the momentum to a 16 – 0 season. This will give them a first round bye in the playoffs, followed by three more wins to claim the Lombardi Trophy. So, yes, the Patriots have a great chance to go 19 – 0 and win the Super Bowl.

Visit PointsBet today for up to $1000 in Free Bets with Code BONUSPROPS.

Check out ThePropsNetwork.com for NFL Picks and News